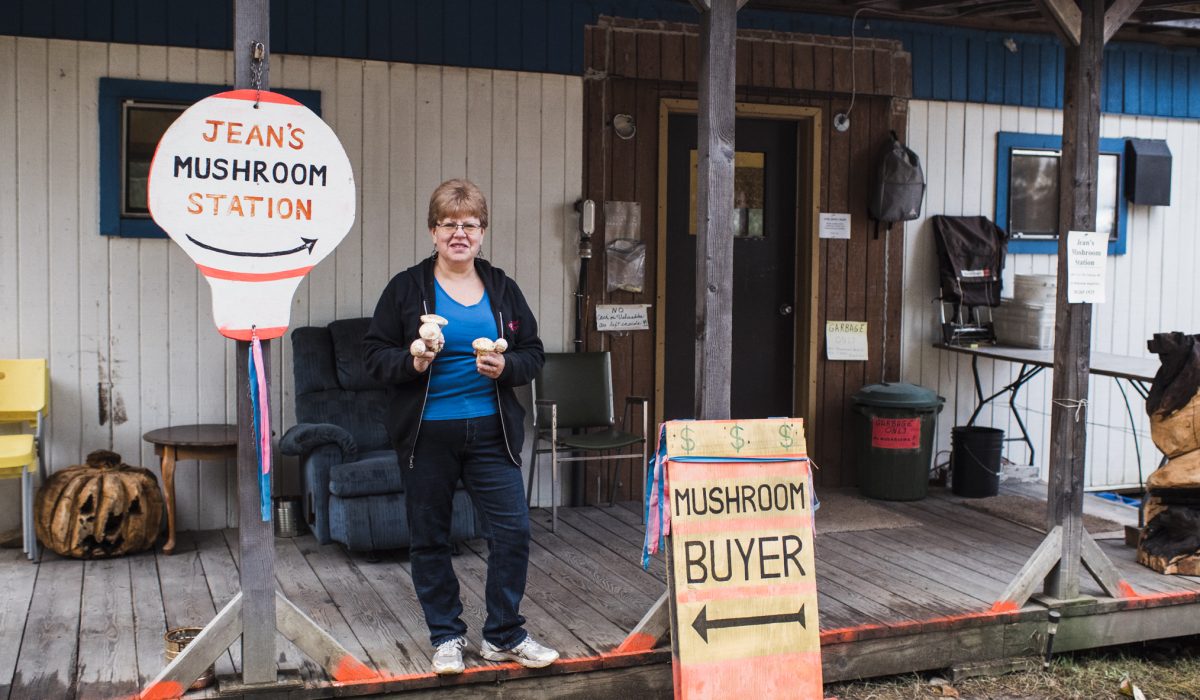 When you imagine a mushroom picker, who comes to mind?

Is it the scruffy, hermit-type you saw hitchhiking along the highway last week? Or maybe you remember that long-haired nomadic couple you met in university, the ones jazzed on all things fungi, mostly the mind-altering varieties. Then there is the bartender at your local legion. The one you went to elementary school with. The mother who cringed in unison with you when the hockey team your teenagers both played on was crushed by the visiting bantam league.

In comes Jean Hewat. Since 1993, she has been the sole owner and operator of Jean’s Mushroom Station, one of a small handful of mushroom buying operations nestled in the idyllic British Columbia mountain town of Nakusp.

Jean was born and raised in Nakusp. When they were children, Jean and two younger siblings would spend their free time roaming the local woods. Amidst the golden tufts of larch needles and the bell-shaped scales of hemlock cones, they would scour the forest floor for mushrooms they could eat and sell. In the spring they would hunt out spongy morels, and in the fall, they went after the lobster, chanterelle, and prized pine mushrooms.

Nakusp has been home to a small and seasonal commercial mushroom industry since 1978. And for the last four decades, generations of families have participated in it.

“Many local people go out on weekends or after work,” Jean explains. “Some even take their holidays during the season, and they use the money as a supplemental income.” The money earned by local pickers often goes towards buying something that normally they couldn’t afford. A coveted household appliance, a set of new winter tires, or a family vacation might be the goal in sight.

“In the beginning, I picked so I could pay for my three kids to play hockey,” Jean says. “It sort of spiralled from there.”

Business aside, Jean is at heart a mushroom ambassador. She willingly educates those curious folks who stop in to find out more about her business and the wonderful world of mushrooms. And while she could easily dismiss them and keep her information secret, she’s friendly and helps them learn instead.

“A good third of the people I see are new and interested,” Jean admits. “I teach them the proper picking techniques.” She stresses the importance of foraging properly so that no harm comes to the mycelium, the webby life force that is buried beneath the mushroom bodies.

“I’ve seen a lot of patches disappear,” Jean admits. “If it gets destroyed due to a severe windstorm, a fire, or logging, it’s a heartbreak really.”

Forestry has been a major economic driver for Nakusp since the 1950s. When he was just 16 years old, Jean’s father, Adrian Dupuis, got his start in the industry at a local tree farm and decades later retired as the superintendent of a local lumber company.

Jean knows the value of forestry to her community. When she is in the forest, she sees pockets of mushrooms thriving along old skid trails, remnants from the horse logging days of the past. Access to existing and new areas to pick are often made possible by the roads built for cut block access. With more selective and less clearcut logging, however, she thinks the two industries could co-exist much better.

“If the company did not take all of the tree species out, and left the smaller larch and hemlock trees, I am sure the mushrooms would still continue to grow,” Jean affirms.

In recent years, Jean has seen first hand how one person’s actions can make a difference. If she knows that an area slated to be logged contains a pocket of sought after mushrooms, she picks up the phone.

“You might have to go out with a forester and explain where they are,” she says. “A lot of people are under the assumption that if an area is going to get logged there is nothing we can do about it. As long as you inquire, maybe there is a chance.”

Jean hopes other pickers will start to share the location of some of their mushroom patches with local forestry companies to help protect them. She believes that such efforts could mean that her two grandchildren will be able to continue the decades-long tradition that three generations before them have engaged in. Most pickers would agree, Jean assures us, that the relationship they have with a patch is not purely commercial.

“When you go to find a patch, you get to know your route, where the mushrooms are and where they should be. Which log, hump, ridge they are on,” Jean says. “So you do form a kind of a bond and you look after your area to preserve it.”