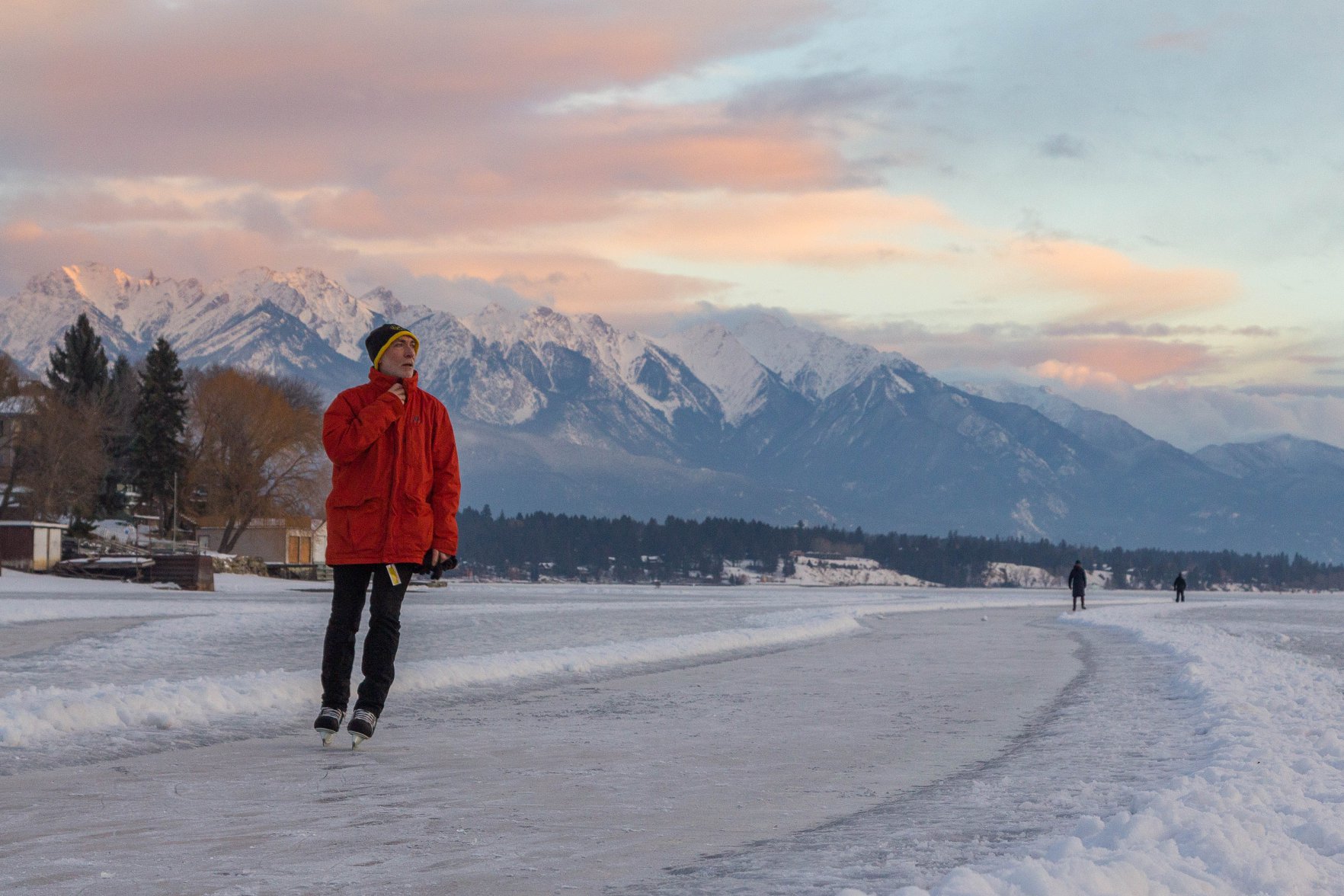 Skate where the ice is

By Anna DulisseMarch 3, 2021No Comments

When Grant Kelly and his buddies in Invermere, British Columbia, found out that their men’s hockey league would be shut down because of Covid-19, they weren’t sure how they were going to make it through the winter.

“December 2nd was a sad day,” Grant recalls. “It’s been an interesting year since then.”

Before moving to Invermere 20 years ago, Grant lived in Calgary, Alberta, and he grew up in the Gatineau region of Quebec. But no matter where he finds himself, hockey is the home he returns to every winter.

“My older brothers all played,” says Grant. “I grew up playing a lot of outdoor hockey. [We played] without any time constraints or anything else going on in our thoughts. Just playing until our parents came to pick us up and maybe even coaxing them to let us stay longer on that outdoor rink.”

Whether in an arena with friends, or out on the ice with his twelve year old son Keegan, for Grant, getting ice time is non-negotiable. Which is why he feels especially lucky to be living next to the 18 km long Lake Windermere.

“Since they shut down the men’s league, it’s turned us back to the great outdoors,” says Grant. “We’ve been playing an average of two to three times a week around four or five o’clock. There’s so much to do here. It’s an absolutely gorgeous place to skate.”

The Whiteway of Windermere

The shallow bulging of the Columbia River, formerly called Lower Columbia Lake, has been known as Lake Windermere since 1883. The Ktunaxa named it ‘Chickadee River’ before Europeans settled in the area. And every winter the largely volunteer run Toby Creek Nordic Club maintains a multi-use 31 km trail on the lake called The Whiteway.

With views of the Purcells to the west and the Rockies to the east, it is no surprise that in a normal year, the frozen lake brings in tourists from all over Canada and Europe. And it is an important community asset for locals as well.

“We saw a huge increase in membership purchases this year,” says Shannon McGinty, a Whiteway Ambassador who works for the Toby Creek Nordic Club during the winter. “It’s got a lot of value for the local community and the people who live here.”

Shannon moved to Invermere in 2018 with her partner. After graduating from university, the couple was happy to find work opportunities in a community that just made sense for them both.

“My partner and I have a fairly active outdoor lifestyle,” says Shannon. “We are really into skiing in the winter, both downhill and nordic, and mountain biking and hiking in the summer. Invermere is a great community for all of those activities. And we have also found the size of Invermere is a nice balance. We really like the in-between, happy medium.”

Shannon is the program coordinator for the Lake Windermere Ambassadors, a group whose overall goal is to maintain the health of Lake Windermere while also allowing for community enjoyment of it. Shannon’s wage is subsidized by the nordic club during the winter to help them manage the Whiteway, and 10% of their user fees are donated to the Ambassadors as well. Becoming more involved in the Whiteway has made her see its immense value.

“It’s this resource that’s available for a really low cost that all members of the community for the most part do access and use,” says Shannon. “If all of a sudden that was no longer available, that would be a huge loss for the community. And in terms of the value to the economy and for local businesses in the community, it definitely is a huge draw or driver.”

Grant also values The Whiteway. He skates on it often with his dog Jersey and son Keegan and is grateful his community wants to help get people outside during the coldest, darkest time of the year. But Grant’s real winter passion is first and foremost hockey.

“Hockey has taught me team and social skills and [I’ve made] the greatest friends I’ve met around the country,” says Grant. “I have had 45 years of awesome true hockey.”

Since 2014, Grant has been personally involved in hosting and organizing the BC Pond Hockey Championships. The event occurs over a weekend in January, drawing up to 22 adult teams from as far away as Newfoundland and Spokane, Washington, and is a fundraiser for Invermere’s Junior B hockey team, the Columbia Valley Rockies.

“It’s a huge social event,” says Grant. “There are shacks, people bring their trailers down, and it varies from year to year, but it’s a pretty good fundraiser.”

In a normal year, volunteers come out to maintain the ice on the lake near Kinsmen Beach, and for three days pucks drop, sticks strike, and not just the beers are intoxicating.

“It just gets you in it,” says Grant. “The whole team spirit and getting together.”

Grant was looking forward to organizing this year’s championships because the 2020 championships were cancelled due to warm weather and rain. But the pandemic put 2021 on the bench, too.

“The pond hockey events that are normally organized with teams were canceled for this year due to COVID restrictions,” says Grant. “There are still many pond hockey rinks up and running around our Lake Windermere in different communities. We are so fortunate to have this wonderful outdoor playground.”

Keeping it cool to keep our rinks

Robert is a professor of Geography and Environmental Studies at Wilfrid Laurier University whose research focuses on the impacts of environmental change on human communities. He is also a lead author for the Intergovernmental Panel on Climate Change’s working group on impacts, vulnerability and adaptation.

Like Grant, skating outdoors in the winter is a tradition that Robert grew up with and something that he identifies with being Canadian.

“Like a lot of kids we had a creek out the back of my house, and we skated on that in the winter time,” Robert remembers. “When I put on a pair of skates, especially outside when you hear the sound the blades make when they scrape across the ice, I think that’s kind of like music to many Canadians’ ears. That sound is unmistakable.”

Of all of his professional accomplishments, the project that Robert works on that may excite him the most is one that he and another researcher came up with over coffee one morning.

“We were chatting about how to make our research more accessible to the general public,” Robert remembers. “We agreed that hockey and talking about the weather are two things that Canadians love to do. We wondered if there would be some way that we could put those two together to track climate change in a citizen science project, and that’s where RinkWatch was born.”

Over 1,500 backyard rink owners have participated in the citizen science project since they launched it in 2012. There is a basic website with an interactive map where you can drop a pin, locate where your backyard rink is, and record whether you can skate or not on that day. That data is then compared to local weather stations to figure out what the key temperature is in that community to have a good skating rink.

“We looked at all of our rinks in Calgary, and we found that somewhere between -5 and -6 degrees is the temperature threshold,” says Robert. “When the temperature is colder than that, chances are everyone is skating. When it’s warmer than that the probability of skating starts to decline steeply.”

Robert and the rest of the RinkWatch team can also use the data they collect to project how warmer winters might affect the amount of outdoor ice time Canadians get each year.

“We saw that by the end of the century, Calgary will probably lose about 20-30% of their skating days,” says Robert. “Where in Montreal and Toronto it will be much more because there will be fewer really cold winter days.”

When trying to communicate climate change to a broad audience, Robert understands why people want to know how it will affect them personally. Melting ice caps and vanishing polar bears may be a cause for concern, but the average Canadian will probably never visit the arctic, making these examples difficult to connect with.

“The RinkWatch stuff strikes a chord,” he says. “It starts a conversation that people can actually identify with and you can talk across generations. People don’t need to see scientific proof, it’s something they can see with their own eyes or their own memory.”

Keep your head up

Since moving to Invermere 20 years ago, Grant Kelly hasn’t noticed a big change in the winters himself. Every winter is different and that’s how it’s always been, but as he is well connected to the locals who grew up playing hockey in the area, he gets the sense that the winters here aren’t what they used to be.

“Just talking to people who grew up here, they say how many longer and colder winters there were. It’s a cause for concern,” he says. “Without sufficient ice on the lake we [could] end up with simply a body of winter water.”

Warmer futures and global pandemics aside, Grant has lost count of the number of times he’s tied up his skate laces and sliced into the Lake Windermere ice this winter. He appreciates what’s in his backyard and doesn’t take it for granted.

“What we need is an appreciation of what we, at times in the past, may have  considered small things,” he says. “I have had conversations on the lake this winter with people about how fortunate we are. Both locals that live here and Albertans with second homes that may only now be seeing the true value of this area.”

Grant’s way of being grateful for what he’s got, and focusing on the positives that have come out of COVID-19, is admirable. As we come up to the one year anniversary of a global pandemic declaration, and continue to wait for a mass vaccine roll out in BC, passing a puck around and getting out for a breath of cold, Canadian air like Grant has done all winter might be the best immunity we can get our gloves on. 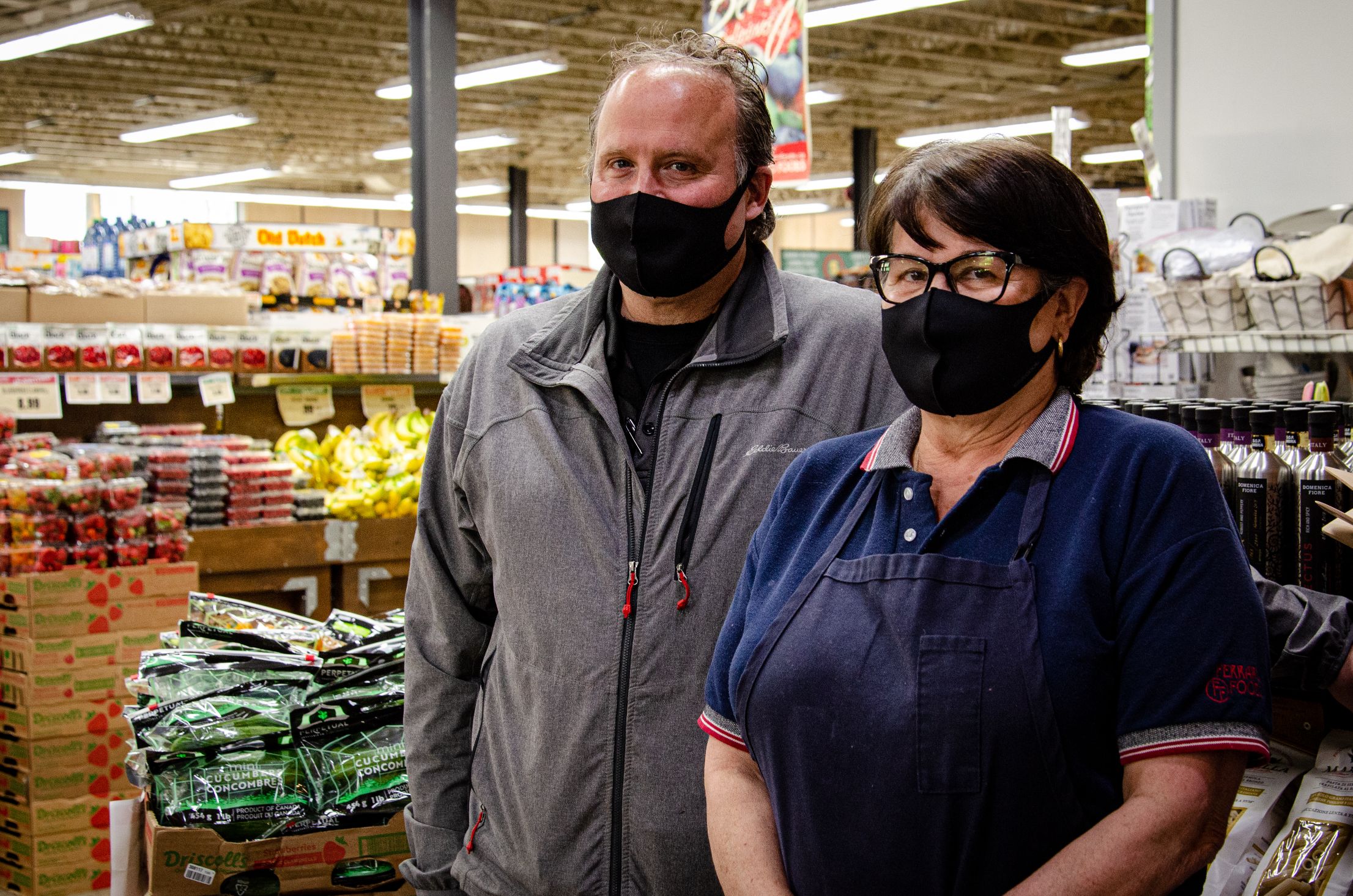 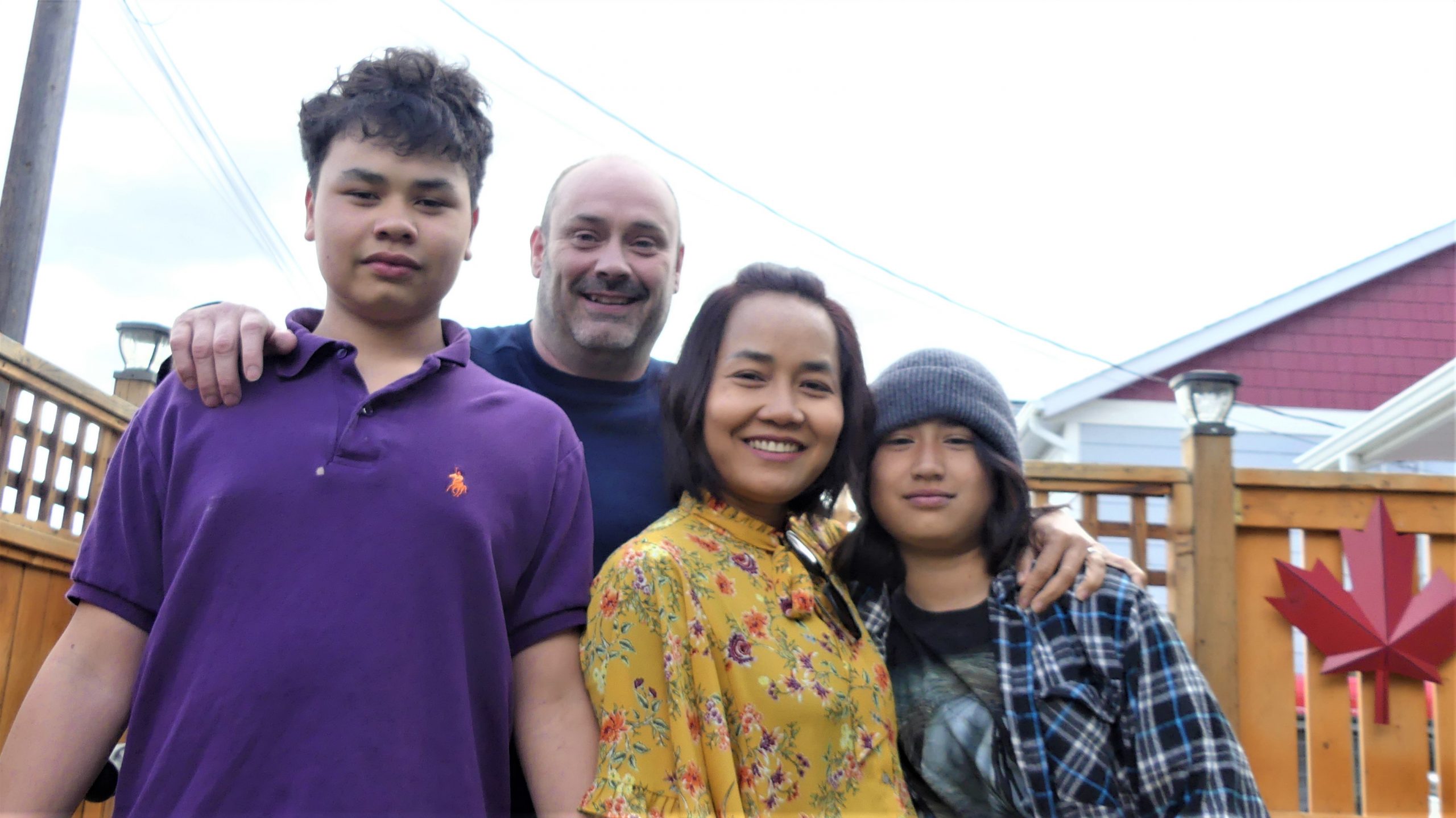 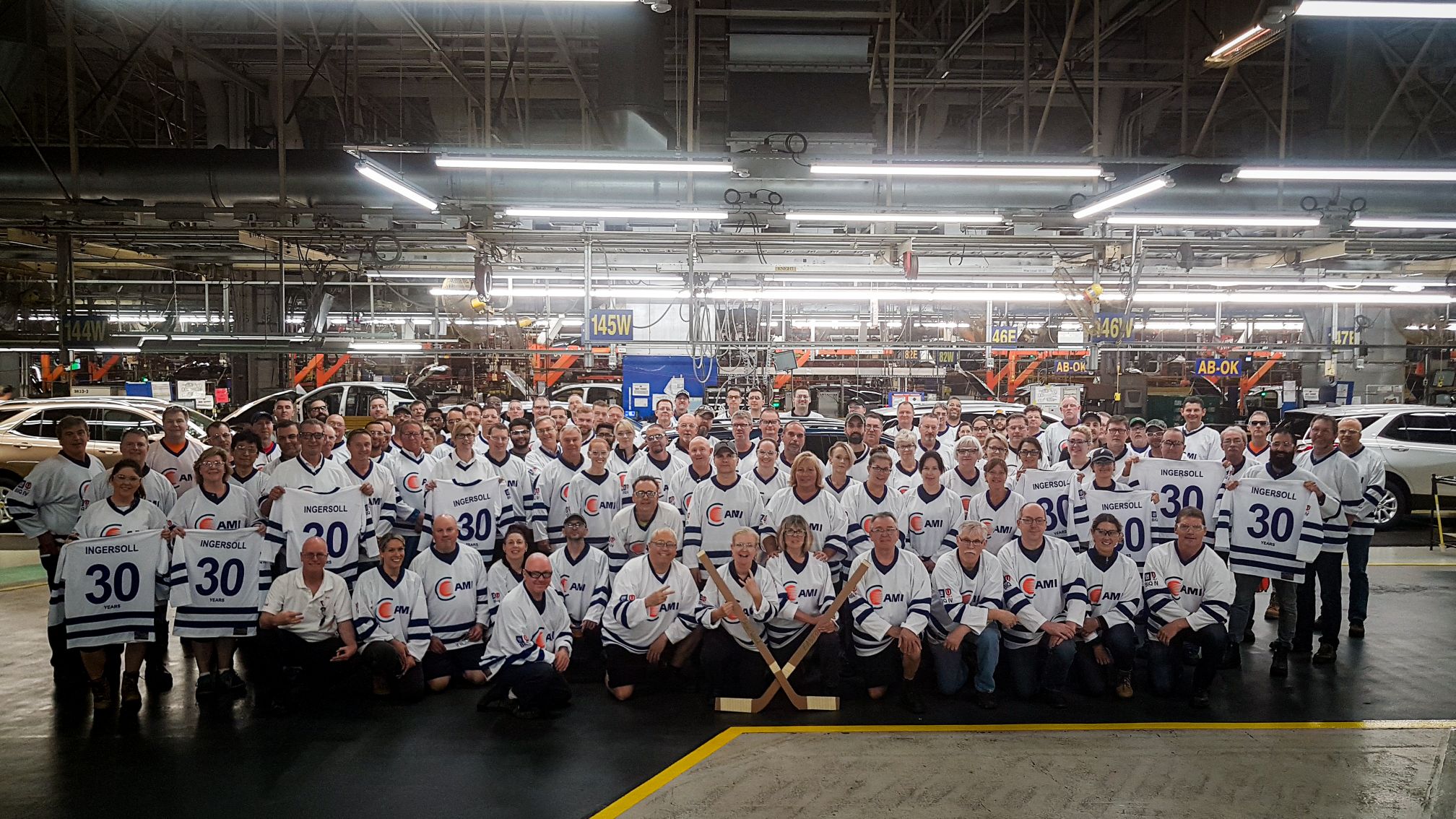