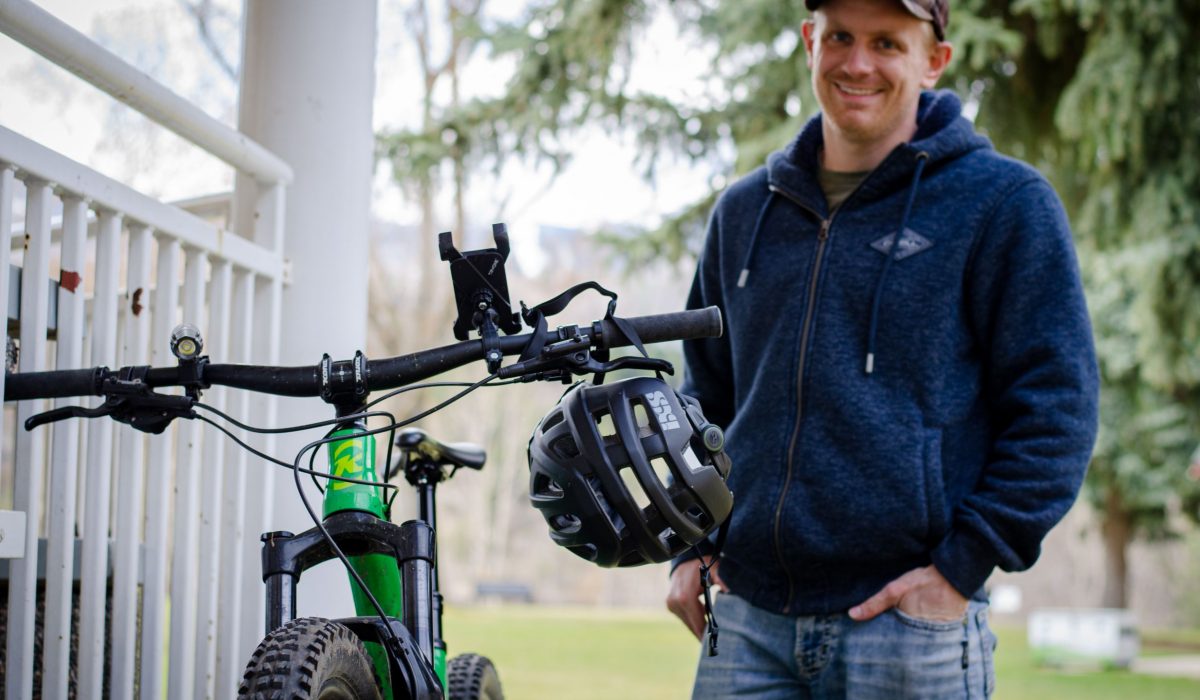 When we saw news that tied right back to some of our Living Here stories, we realized it was time to bring you short follow ups to some of the big stories from our small towns. Read what’s new with three of our earlier stories to see how things are moving forward in your community.

Gearing up for another active year

It’s been almost one year since Living Here last connected with Trail, British Columbia’s Glen Byle, and almost five since he traded in his Ford F250 for an electric fat bike. Now a one-vehicle family, the Byles have managed to save around $5,000 a year since the truck left their driveway for good.

“The extra spending money that we have is AMAZING,” Glen shares. “I finally bought the new mountain bike that I wanted last year, and there are many things that we are able to afford now that increases our quality of life. Like eating out at our favourite restaurants.”

Whether ordering takeout from Ace of Taste, picking up lunch from Kootenay Kebab, or enjoying a date night with his wife Katie at the Trail Beer Refinery, Glen is in a better position to support local, cook less, and he also feels healthier.

“The main reason I switched from my truck to a bike was for the cost savings,” Glen admits. “But now that I’ve done it for a while, I really notice the health impact of sitting in a car for such a big part of the day. It’s definitely worth the odd bike ride in the snow and rain.”

While Glen personally has enjoyed his new lifestyle change and gets that it’s not for everyone, if it’s feeling safe on the road that is your concern, he is doing what he can to change that.

This March, a friend and member of his church told Glen he was interested in ditching his car for an e-bike but that with a steep, long uphill part of his daily commute, and the fact that his apartment has little storage space, he wasn’t sure it would work for him. After a few conversations with Glen, he is nearly ready to make the switch.

“We talked a lot about the different types of e-bikes, which ones are better for hills,” says Glen. “And about folding e-bikes and the pros and cons. I offered for him to try out my e-bike.”

Making individual change is one thing, and Glen is aware that Trail has a lot of work to do to make the community safer for cyclists. He is hopeful that local residents and decision makers will seize the opportunities in front of them. The South Kootenay Green Link, a car-free connector trail that will provide a safe commuting route all the way from Rossland to Fruitvale, is one of these opportunities.

“I think it would be amazing,” Glen says. “There are lots of people who commute to Trail from Fruitvale and Montrose and who won’t do it by bike because of that stretch of highway. It’s 80 km/hr and the shoulder is often very dirty. So many people want it.”

Trail also has yet to adopt an active transportation network plan, which would enable the city to receive significant provincial and federal grants that cover up to 70% of eligible cycling infrastructure projects. Neighbouring communities like Castlegar and Nelson have taken advantage of these incentives in recent years.

“Safety on the road is a huge area of stress for bikers,” Glen says. “But with our current infrastructure cyclists often have no choice but to trust that car drivers are paying attention and are going to be safe around them. A proper active transportation network will have separate lanes for bikes and cars.”

Bringing better cycling infrastructure to Trail and helping encourage others to use a bike instead of a car more often is something Glen feels proud to be a part of. And while he’s happy to be there for his community, his personal vision and experiences are what drive him.

“To be able to raise my children in a place they can explore, go to the park or to their friend’s houses, and be active and to be able to do that safely is kind of big for me,” Glen admits. “I think in 10 years for sure Trail could be a community that is easier and safer to move around, especially for children.”

Read the full story, Why a family man in Trail traded his pickup truck for an e-bike and hasn’t looked back

From Canna Lilies to Camas: Spring is for Gardeners

Remember we did a story about the incredible Community in Bloom volunteers in Trail, British Columbia? Well, spring has sprung for these busy folk, who are taking on the season with  rake, shovel and hoe.

For the multi-talented Rachael Brown, volunteer coordinator and landscaper at Community in Bloom, the season is well underway. The volunteers are gearing up for their 19th season of painting the town of Trail with flowers.

The local chapter of Community in Bloom in Trail, like every other community, didn’t get the opportunity to participate in the national competition in the summer of 2020. This summer, Trail and the other communities will come together for a virtual competition.

Dan Rodlie, who was hanging up his gloves when we last spoke to his wife, Lana, remains Chair of the Community in Bloom for the 2021 season. Some volunteer jobs are too good to step away from.

Coordinator Rachael works hard to make sure that volunteers stay safe from Covid-19 this season while they dig in with their shovels and hang the flower pots that light up the downtown. She’s an old hat at this, as she saw her volunteers through last summer’s activities safely.

Community in Bloom is moving forward fearlessly, despite it being the second spring of the pandemic. “The crew received a ‘new-to-us truck.’ It’s gorgeous and doesn’t smell of bone meal yet,” says Rachael.

The group has also received further support from the City of Trail’s public works including updated irrigation systems and improved garden bed infrastructure.

Rachael says, “And they have loaded us up with awesome PPE; masks, sanitizer and gloves so that our venture out into the gardens is done responsibly.”

The volunteers are all set. So let’s bring on the sunshine and the rain and the dirt, and let’s see what grows.

In May of 2019, before any of us knew that we would be heading into a global pandemic, the province of British Columbia passed the Zero-Emissions Vehicle Act (ZEV Act) to combat some of the worst effects of pollution, including the pollution caused by personal vehicles. The ZEV Act will require that all light duty cars and trucks sold in British Columbia will be zero-emission by 2040.

This means that in less than 20 years, there will no longer be any internal combustion vehicles being produced on assembly lines. We have already seen some major automotive plants, such as CAMI automotive in Ingersoll, Ontario, make the shift to electric vehicle manufacturing, which you might recall from one of our recent stories featuring the plant’s head union representative, Mike Van Boekel.

With an increase in electric vehicle manufacturing, there will also be an increased demand for skilled workers trained to work safely on these vehicles.

At the beginning of the year, we met Steve Elder, an instructor at the British Columbia Institute for Technology (BCIT). Steve is more ambitious in his predictions and believes that there will no longer be any internal combustion vehicles on production lines as soon as 2035.

This is why he helped spearhead an electric vehicle maintenance training program in 2019 through BCIT called, Battery Vehicle Technology and Service, a 36-hour speciality training program that was the first of its kind in British Columbia.

Now the province, in partnership with the Clean BC Initiative, is investing $440,000 into expanding similar training opportunities across British Columbia. Mechanics interested in upgrading their skills can now find these programs at three more post-secondary institutions: Okanagan College in Kelowna, Camosun College in Victoria, and the College of New Caledonia in Prince George. This means that there is opportunity for mechanics across the province to access this week-long program in the Interior, further north, and on the Island.

This is great news for people in the automotive industry who recognize the need for these types of training programs. They will provide people in the industry critical skills that will be a major part of the post-pandemic economic recovery as different types of industries shift to more renewable energies.

Patrick Jones, an automotive instructor at Camosun College, is thrilled to be a part of such an exciting time for the industry. He receives inquiries about electric vehicle training all the time. For the past five years, Patrick has been focusing on his own professional development, engaging in skills training around electric vehicles and hybrid systems and operations. More recently, Patrick was able to meet with two other instructors from the colleges who will be rolling out this new program, and they were all able to receive “Train the Trainer” instruction from the one and only Steve Elder.

“This trade is so dynamic; it’s always changing, and this is one of the biggest changes we have seen,” Patrick says about the shift to electric.

These new programs will be very similar to the course that Steve teaches at BCIT. Patrick says that by late fall they will be launching their Electric Vehicle Training program, which will be available to advanced and Red Seal Automotive Service Technicians. Just like the course at BCIT, there will be six hours of online learning paired with 30 hours of on campus, hands on instruction.

“This training program is just a first step in a broader range of programs; there is lots of opportunity for the future,” Patrick says.

Patrick would love to see a move towards retrofitting and converting old cars to support electric (not unlike Steve and his old Mercury Shop Truck). There are lots of car enthusiasts out there who would probably love to see some of their favourite classic vehicles reimagined. The possibilities are endless; it is an exciting time for the industry and for everyone going along for the ride.

Read the original stories Shifting into Electric Gear and If You Build It, Great Things will Come